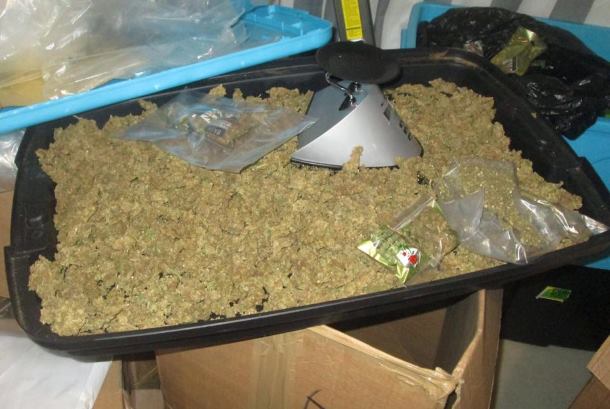 As this is women’s month, and crimes against women and children remain a priority in the Western Cape SAPS all year round and that the perpetrators of these crimes be hunted down mercilessly, to face the full might of the law, members of Table View SAPS stumbled upon dagga when they went searching for a perpetrator.

Early this morning (Thursday, 2017-08-10) Table View SAPS members attended to a complaint of domestic violence in which a woman and her child were allegedly assaulted. The complainant indicated to police that she will show them where the perpetrator is and they went to a security complex at the corners of Sandown Drive and Wood Street, Sandown Estate, Table View, where she pointed out a flat.

At approximately 01:00 the members enquired over his presence at the flat at which time a male occupant indicated that the specific person was not there. The members asked permission to enter the flat to make sure that he was not there and the man agreed. Upon searching the flat the members recovered a huge amount of dried hydroponic dagga in one of the bedrooms. The dagga was in large boxes, numerous glass jars and other containers. Numerous amounts had been packaged, vacuum sealed for distribution. Scales and vacuum sealers were also found in the apartment. In one of the bathrooms smaller amounts of dagga was also seized. Two suspects, a man aged 33 and his wife, aged 28, were arrested. Provincial Organized Crime detectives were on the scene and are to conduct the investigation.

It appears that the dagga is imported, then packaged at the flat from where it is distributed.

The two suspects are to appear in Cape Town Magistrates Court tomorrow (Friday, 2017-08-11). The estimated street value of the Dagga is R3 Million.