The SAPS’ fight against the proliferation of drugs paid off on 18 March 2017, at 23:30 when Cradock Highway Patrol members with Cradock members pulled off a white Toyota Hilux bakkie travelling towards Port Elizabeth and discovered 23 bags of dagga in the back the bakkie. Two (2) suspects, aged 25 and 27 years old were arrested. The 23 bags of dagga with a total weight of 486.2 kg and an estimated street value of R 1, 4million was confiscated.

While on the scene, another white Colt bakkie was also stopped. Police noticed that the vehicle had a long wheelbase, but the canopy was smaller compared to the long wheelbase of the bakkie. A decision was made that proper investigation is conducted at the police station where there was adequate lighting. Upon searching the vehicle, police discovered 200 000 mandrax tablets with an estimated street value of R16 million in a hidden compartment of the canopy. The 45-year-old suspect was arrested.

Eastern Cape Provincial Commissioner, Lieutenant General Liziwe Ntshinga, commended the Cradock SAPS members for their alertness and the recovery of the dagga and mandrax. 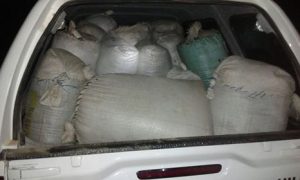